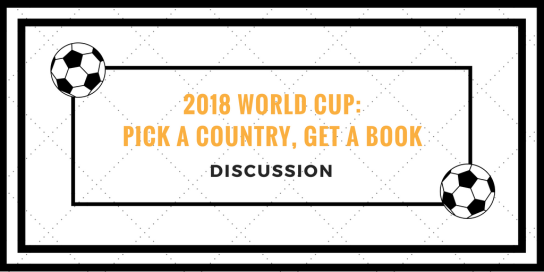 Hello everyone! So, if you’ve been living under a rock for the past week and don’t know, the 2018 World Cup (aka THE biggest soccer game in the world) is currently happening in Russia! Starting June 14 and ending July 15, 32 countries will play each other in several rounds bringing it down by the end to the final World Cup winner! Right now, there are 32 teams in the running but, in the second round, there will only be 16. Today, I thought I would take my pick for who would be the 16 and give a book recommendation based on what the country is! Each book is either set in the country or the MC and/or author is from the respective country. Hope you enjoy:

And that is all for the book recommendations! TBH, I don’t really have a pick for who would be the 16, I just couldn’t comfortably pick a book rec for all the countries so I just used the 16 easiest lol Now, are you watching this year’s World Cup? Which country/countries are you rooting for? Let me know in the comments below!! Personally, I’m rooting for Egypt and the rest is on a game by game basis hahaha! Anyways, thanks, have a great day/night and tata for now!

PS. quite a few of the books are on sale/free/really cheap on Amazon so feel free to check out the books/links (they won’t bite!)